I had a wonderful time at the Brighton Craft Fair on Saturday, despite being very nervous about selling at a different venue further afield than I’m used to. I needn’t have worried as there were a few familiar faces from the fairs I’ve done in Eastbourne, and plenty of friendly new ones who made me feel very welcome! There is a strong feeling of community amongst the crafters at these fairs that I really didn’t expect. I suppose I assumed that it would be more of a competative atmosphere as each stall vied for the customers’ attention, but it’s much more supportive than that, and everyone is happy to see each other do well. You can see photos of other stalls and there wares here on Facebook.

Doing these fairs at all would be completely impossible for me without the support of Mr BAM, who was an absolute trooper at the Brighton Fair. He sat with me on the stall for much of the day (admittedly he was playing Candy Crush on his tablet most of the time!) and brought me sushi for lunch. I’m very lucky to have him!

My stall at Brighton Craft Fair

The Friends Meeting House where the fair took place was a fantastic venue and the location in the heart of the Lanes was just perfect. There was a Childrens Parade taking place in the morning, marking the start of the Brighton Fringe festival, which did mean road closures in the city centre for part of the day, but even so there was an endless stream of people coming in to look around, even right up to five o’clock when we were trying to pack away! The fair organisers are lovely, helpful people who make fantastic tea, so I think it’s safe to say I’ll be doing this fair again! Which reminds me, I will be adding a page with the dates of all my upcoming craft fair dates, so look out for that!

The Friends Meeting House on Ship Street in Brighton

I didn’t get as many new products ready for the Brighton Craft Fair as I would have liked. I simply ran out of time to finish them! But I did manage to do a few more stripey cotton plant pot covers: 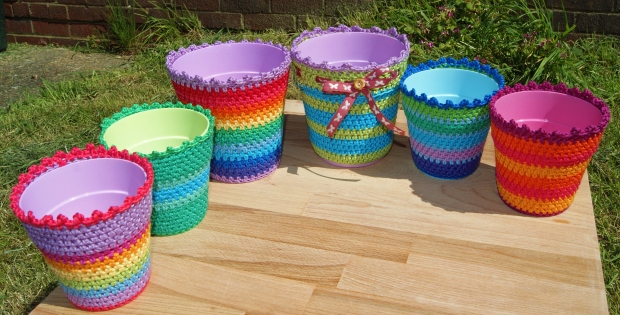 and I made some felted bowls that sold very well but I haven’t gotten around to taking any decent pictures of them yet. (They are in the bottom left corner of the photo of my stall at the top of the post if you’re interested though!)

Since the fair on Saturday I’ve been working hard to update my Folksy and Etsy shops but it’s going to take a while to list everything I want to. Yesterday I added tea cosies and felted pot holders and coasters, and I aim to work my way through the rest of the felted items by the end of this week. It will depend on the weather a bit though, as I’m trying to take all the pictures outdoors in the sunshine whenever possible.

One of my felted pot holders

I have some beautiful patterned linen that it’s on its way to becoming jug covers, a cardigan that I am about halfway through crocheting, a kit to make an Attic24 cushion, and I’m doing a sewing class tomorrow to learn how to read patterns, so it’s going to be another busy week!