I’m the crafty type who always has a stupid number of projects on the go, but there’s one work in progress that’s been around for so long that I usually forget to count it: my knitted squares blanket. I don’t remember exactly when I started making squares for this project, but it was probably in my mid-to-late teens. As the blanket still isn’t finished nearly twenty years later, you can probably guess that progress was a bit slow!

I do have a surprisingly clear memory of knitting the green square with the uneven stripes, because I was showing off my knitting skills to my friends after an evening at the pub. The next day I realised that although the tension was fine and I hadn’t dropped a stitch, the stripes were slightly different sizes. 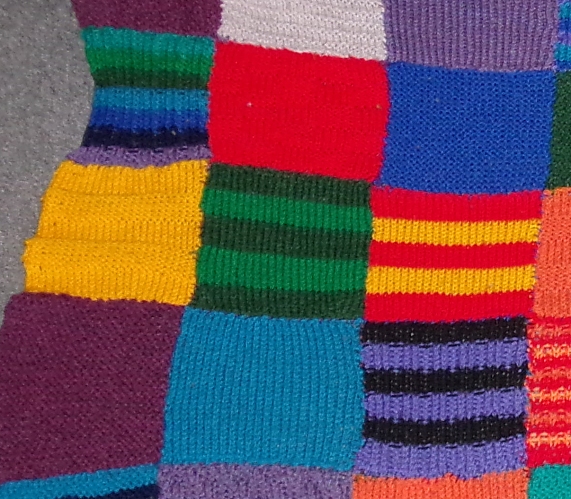 Frogging anything was unthinkable at this early stage in my knitting life so the mistake stayed, both as a warning not to knit whilst under the influence (still good advice!) and as a reminder of a good night out with my friends. Oh,and they were impressed, by the way! Long haired goths and punks the lot of them, except the buxom childcare assistant with the tigger tattoo. I was “well weird” even for them, but we were all striving to find new ways to be non-conformist in the post-Grunge 90s. Sigh.

The blanket came to university with me and saw  things I wouldn’t dare write about on a blog that my mum reads (just normal student stuff, mum, I promise!) and it’s been in almost constant use since it was big enough to keep my lap warm. I can’t believe its still in one piece! I was too lazy to sew the ends in properly, so most of them were just knotted and snipped off 1 cm away from the knitting! (Shudder.) I spent no time or effort on finishing things properly, and all the squares are different shapes and sizes, and the yarn different weights and fibres!

Somehow, it still works and I love its scrappy mismatched appearance. There was only one square that really stuck out as an ugly mistake, and that was the pink striped one I’d knitted out of left over tapestry wool. It was fine until the blanket was washed for the first time, at which point it shrunk and started to felt. Oops.

I looked at my scrappy, knitted patchwork a year or so ago with the certainty that I’d never feel like knitting squares for it again, and I decided I’d give it a wide crochet border to make it a more useful size and give it a more finished look. It was a good idea in theory, but the result was not what I’d planned.

The tension was all wrong and the crochet was far too bulky for the knitting. It might have been alright if I hadn’t chained one between each cluster of three trebles, but I doubt it! It just wouldn’t lie flat or behave itself at all. 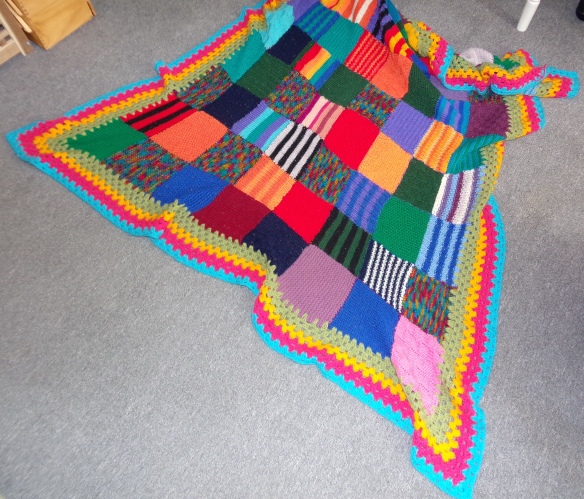 I left the border for months with the vague hope that it might just magically sort itself out. It didn’t. So I frogged the crochet and rewound the yarn, which even with a yarn winder took hours! I used some of the frogged yarn to knit a replacement square for the semi-felted one,and although I was nervous about removing a square in the middle of the blanket, it all went quite smoothly. 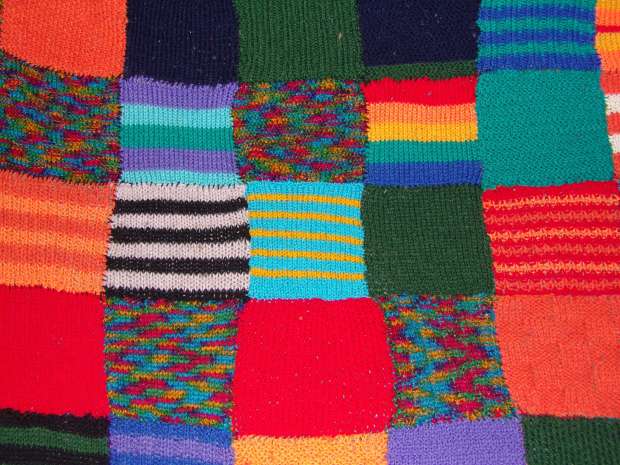 With the brand spanking new square in place

So, new plan: knit strips of garter stitch in DK 40 stitches across to sew on as a border (and put up with constant “oh, are you knitting a scarf?” questions!). Ever the bad influence, I’m drawing inspiration from The Twisted Yarn’s take on the Arne and Carlos knitted blanket, which involves alternating between colours every two rows. 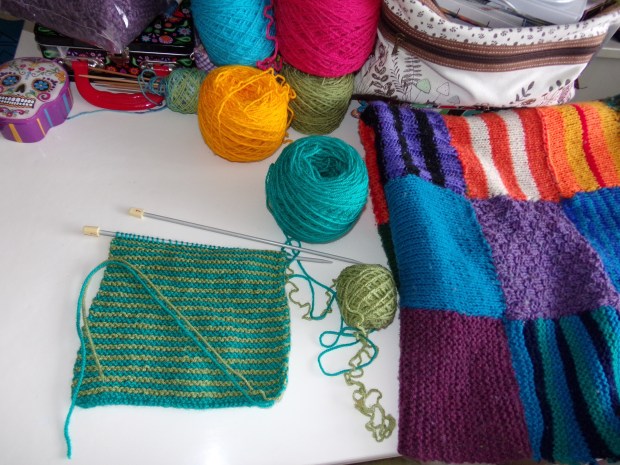 This may take some time, but hopefully not the years it’s taken to get me this far with the blanket!

In contrast, the star ripple blanket that I made for the birthday nieceling number 1 hooked up in near record time! 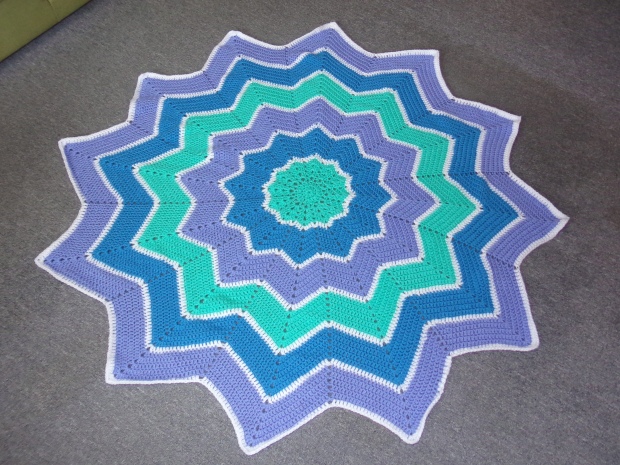 It’s very similar to the first blanket I made with Celeste Young’s Rainbow Ripple Baby Blanket pattern (available free on Ravelry). Three of the colours, Lavender, Aspsen and Aster, are the same, but I used White instead of Cream, and the colours are in a slightly different order.

As predicted, nieceling number 2 looked at her sister’s blanket, looked at the Hulk inspired one I made her brother for his birthday last month, and decided she would like one too. Oh well, at least that’s her Christmas present sorted then! And after that, I’m going to concentrate on finishing the Attic 24 Granny Stripe blanket I have been neglecting since spring!

One way or another, I will be snuggled up under a handmade blanket this winter! But whether it is knitted or crocheted, finished or in progress, still remains to be seen.