I’ve taken so long to post this that another blogging milestone has snuck up on me! My two year anniversary as a blogger! When I started out I knew there would be times that I wasn’t posting as often as I’d like, but I honestly never considered that the reason would be that I’m too tired and pregnant! I am sleeping A LOT at the moment, and the combination of the hot weather and my blimp-like figure means I’m not getting out of the flat much. And as if preparing for the baby’s arrival wasn’t enough to keep me busy, we will be moving house in a few weeks too!

So, lots of big changes coming up, but all good ones! In the meantime the flat looks like a bomb hit it, and I spend too much time talking to the bump and not enough actually packing. Oh, and one of my best friends is getting married next week so I’ve been busy making bunting and trying to find something to wear for the big day. Finding pretty shoes for my enormous, swollen feet was not easy, but I eventually found something tastefully sparkly and comfortable!

All my crochet energy has been spent on the wedding bunting (more on that next time) but I’ve also been knitting for the baby too. It seemed to take forever, but I’ve finished the stripey baby blanket!

The pattern I used was a slightly modified version of the Simple Striped Baby Blanket by Natasha Price (available for free via Ravelry). I used DK yarn on 4.5 mm needles and cast on with 156 stitches (instead of worsted yarn on 5 mm needles with 144 stitches) and changed colour pretty much randomly. My blanket came out measuring approximately 80 cm x 100 cm, which is a bit bigger than the original pattern but about right for a cot blanket.

This blanket is an absolute nightmare to measure accurately! I used King Cole Bamboo Cotton DK, which is beautifully soft, but drapes and slithers rather than holding its shape – particularly when worked at this tension. It was exactly what I wanted for this blanket, all delicate and squishy next to the baby’s skin, and intended to feel delightful instead of looking tidy! 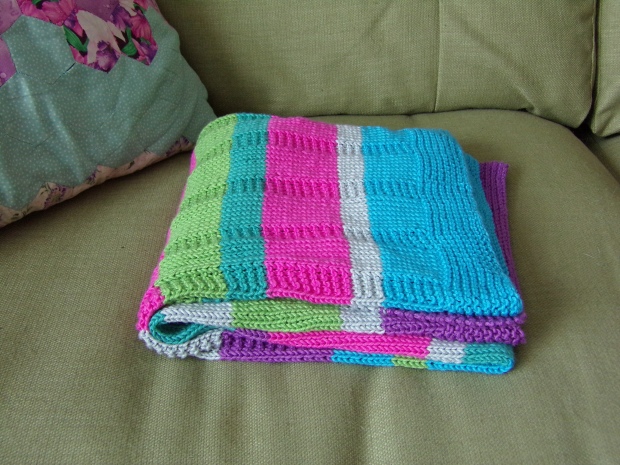 The yarn was a bit splitty to work with, and despite the simple textured pattern I had to keep a crochet hook handy to fix my many mishaps, so it wasn’t quite the mindless, relaxing knit I was hoping for. I still really enjoyed making it though, imagining wrapping it round my baby when she arrives! And of course, I enjoyed all those bright colours – no pastels!

Having made several baby cardigans already, I decided to try something a bit different, and the Magic Troll vest by Eba Design caught my eye on Ravelry. I was feeling very pleased with myself when I found some beautiful cotton acrylic mix yarn in my stash that was just perfect for the project, but any pretense at thriftiness went right out the window when I ordered a new 3.75 mm Knit Pro circular needle because I didn’t have one that was 40cm long. Never mind. At least the buttons came from my stash!

The slightly oddly sized pocket was not part of the original patten, but was added to disguise my awkward attempt at travelling jogless stripes. Maybe they would have been less noticeable after a good blocking (and definitely would have been better on the back!) but I just couldn’t make myself do it. At least my attempts at a three needle bind off and inserting a patch pocket (both firsts for me!) worked quite well. I was glad to try something that nudged me out of my comfort zone a little, making me try something new! The newborn size for this pattern was free but I may well pay for the larger sizes because it really is an adorable pattern (go look at some of the pictures of baby’s wearing their vests on Ravelry – they are scrumptious! Just ignore the scary dolls…) BTW I have no idea why it’s called a Magic Troll Vest!

I’ve been given lots of lovely things for the baby, including some gorgeous hand knitted things from my knitting group friends, and I’ll try to photograph and post about them when I’m I bit more organised! There is a very special hand knit item that my mum gave me recently that I’d like to share now though. Here it is…

My mum bought the yarn for this cardigan when she was pregnant with me! She went on her very first trip abroad, a day trip to Dieppe in France, and as she didn’t know if I was a boy or a girl at the time, she hedged her bets and bought white yarn with both blue and pink flecks in it. I think she actually knitted it up after I was born as it is quite a girly garment, but she definitely finished it in time for it to get a lot of use! My little sister probably had it after me, and now my little one will get to wear it too! It’s still lovely and soft, and I’m thrilled to be able to give my baby something that was made for me 35 years ago!

Maybe it’s time for me to lie down with a cold flannel over my face again. I have just finished knitting another one…

Just got to remember not to look too closely at this one. There are mistakes…